Some In GOP Now Urging Vaccinations - Others Are Not 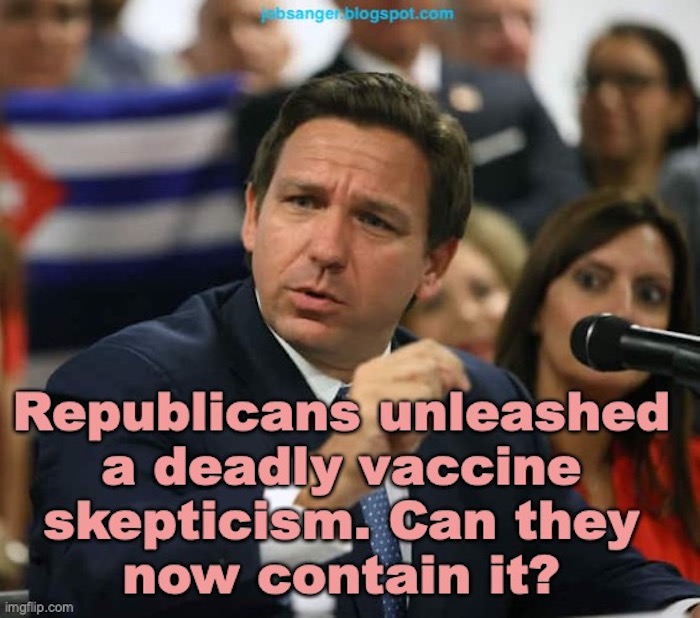 The new cases of COVID-19 have spiked about 800% in the last three weeks nationwide. This has some Republicans changing their minds and now urging their supporters to get vaccinated. Will this help the nation to get to the goal that would cause herd immunity, or have they waited too long and their supporters are now convinced not to get vaccinated. The next few weeks will tell.

Here is some of what E.J. Dionne Jr. had to say about it in The Washington Post:

Bad news is leading to at least a bit of good news: The surge of the coronavirus delta variant seems to have lit a fire under many Republican politicians. As the virus spreads largely in GOP regions with low vaccination rates, leaders of a party where anti-vax sentiment has run rampant have started sounding the alarm: Not getting vaccinated really can kill you.

One of the most unequivocal statements came from Senate Minority Leader Mitch McConnell (R-Ky.). “These shots need to get in everybody’s arm as rapidly as possible,” he said last week, adding a swipe at those pushing falsehoods about vaccines, who happen to include many in his own party. . . .

Yes, even the man peddling “Don’t Fauci My Florida” T-shirts seems to have noticed that over the past two weeks, 20 percent of all the nation’s new covid-19 cases were in his state. . . .

The pro-vaccine message is even reaching the heart of Trump country. “Folks [are] supposed to have common sense,” Alabama Republican Gov. Kay Ivey said on Thursday. “But it’s time to start blamingthe unvaccinated folks, not the regular folks. It’s the unvaccinated folks that are letting us down.” You might say the scolding was overdue: Ivey leads the country’s least vaccinated state. . . .

Arkansas Gov. Asa Hutchinson and Ohio Gov. Mike DeWine are among those Republicans who have been especially passionate about getting the job done, Zients said. Republican governors of Democratic-leaning states — Phil Scott in Vermont, Charlie Baker in Massachusetts, Larry Hogan of Maryland and Chris Sununu of New Hampshire — can be proud that their states are in the top 10 in vaccination rates.

Infuriatingly, there are still Republicans — Rep. Marjorie Taylor Greene of Georgia and Sen. Ron Johnson of Wisconsin among them — who continue to reinforce right-wing vaccine skepticism. The doubts they and others are spreading on Fox News (even if some in Fox News’s ranks, including Sean Hannity, seem to be repenting) and on other pro-Trump outlets have created a toxic vaccine gap.

Data from the Centers for Disease Control and Prevention show that as of July 23, the 20 states with the highest vaccination rates (counting the District of Columbia as a state) all voted for President Biden. . . .

An Associated Press-NORC poll released Friday found that among Democrats, only 18 percent were “not very” or “not at all” confident in the effectiveness of vaccines; among Republicans, 42 percent expressed such doubts.

It’s the new political geography of sickness and death. . . .

Republican politicians, keep shouting from the rooftops about the imperative of getting vaccinated. But you also need to take another virus seriously. The spread of extremism in your party is deadly — to our health and to our democracy.