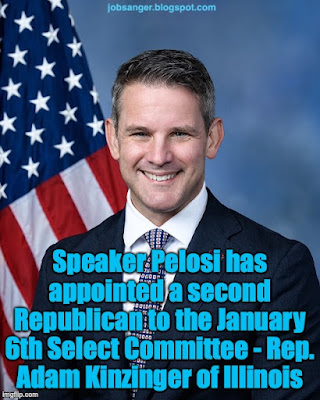 When the Select Committee to investigate the January 6th Capitol riots was created, Speaker Pelosi was to appoint 8 members and Minority Leader McCarthy was to appoint 5 members.

Pelosi evened the odds just a bit by appointing 7 Democrats and 1 Republican -- Liz Cheney of Wyoming.

But McCarthy was obviously trying to subvert the committee. He delayed appointing anyone until a few days before the committee was to meet -- and then appointed a couple of members that everyone knew would turn the committee into a circus.

But Pelosi banned two of the 5 members that McCarthy selected -- the two (Rep. Banks and Rep. Jordan) most likely to disrupt the committee's proceedings. Angered, McCarthy then withdrew all 5 of his committee picks.

McCarthy had hoped that the move would make the committee look unfair. He has failed in that. There was already one Republican on the committee (Cheney), and now Pelosi has appointed a second. It is Rep. Adam Kinzinger of Illinois. Kinzinger, like Cheney, has been opposed to Trump's efforts to overturn the 2020 election results.

I don't like the politics of either Cheney or Kinzinger, but I think both will be good members of the Select Committee -- members that will search for the truth instead of spreading Trump lies.