Trump Is Now Discouraging People From Being Vaccinated 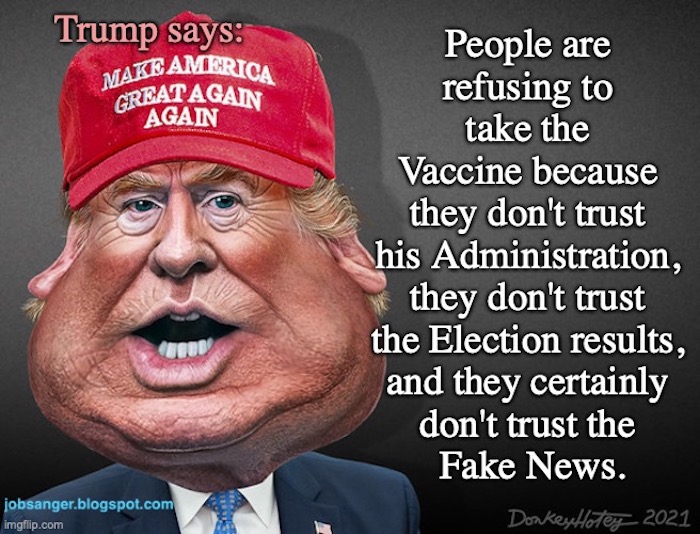 Donald Trump had a serious bout with COVID-19, and was saved by getting the best medical care available from one of the best hospitals. And he and his family have all now been vaccinated against COVID-19. It is both mean-spirited and stupid that he is now trying to discourage people from getting vaccinated.

The following is part of an article by Steve Been at MSNBC.com:

On March 1, as public access to COVID-19 vaccines became more common, Donald Trump appeared at a far-right gathering and eventually said the right thing. After insisting that he wanted credit for the development of the vaccines, the former president told a CPAC audience, "So everybody, go get your shot."

About a week later, the Republican issued a related statement that meandered, and was annoyingly whiny, but which was nevertheless pro-vaccine: Trump called the shots "beautiful" and suggested that "everyone" would be receiving them.

As we discussed at the time, much of the former president's statement was pitiful -- his goal was clearly to seek acclaim for himself, prioritizing his ego over public needs -- but the underlying point remained the same: Trump framed the distribution of vaccines as fundamentally a good thing.

Four months later, the Republican's message has taken a dramatic turn for the worse. Trump issued this written statement yesterday:

The shift in posture is unmistakable: In March, the former president encouraged people -- most notably his own conservative followers -- to do the right thing, roll up their sleeves, and get vaccinated. In July, Trump's new message implicitly suggests that only those who believe President Biden, election results, and independent news organizations are getting the shots.

As infection numbers inch higher, this is plainly dangerous. The more vaccinations are politicized, the more it undermines public health.

Also note the degree to which Trump is blaming Biden for far-right vaccine opponents' refusals. The rhetoric introduces the possibility of a twisted incentive: Those who want to keep the Democratic White House "behind schedule" suddenly have another reason to avoid vaccinations. . . .

No good can come of this. The Biden administration is engaged in a desperate campaign to protect public health and save lives -- without regard for party or ideology. Everyone would benefit if the president's Republican critics at least tried to be responsible.