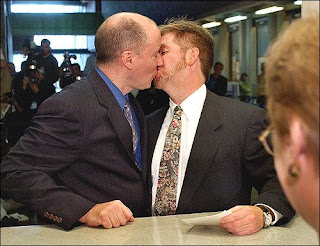 Yesterday the California Supreme Court took a bold step and declared that all Californians should have equal rights -- even homosexuals. The court struck down a ban against gay marriage by a 4-3 vote. That makes California the second state to legalize gay marriage -- the other being Massachusetts.
The court said, "In contrast to earlier times, our state now recognizes that an individual's capacity to establish a loving and long-term committed relationship with another person and responsibly to care for and raise children does not depend upon the individual's sexual orientation."
I'm sure many evangelicals will be quick to blame "those activist Democratic judges", but that would be wrong. The California Supreme Court is dominated by Republicans, and three of the four majority votes came from justices appointed by Republicans. This was not a party-driven decision. This was just the justices declaring that everyone should have equal rights. What a novel concept!
Of course the right-wing fundies are about to pop a blood vessel over the decision. Fundie leader James Dobson says the people of California must quickly pass a constitutional amendment because "Only then can they protect themselves from this latest example of judicial tyranny".
I have to admit I just don't understand what he wants to protect people from. Exactly how does two people of the same sex getting married hurt anyone else? No one is being forced to do anything. Evangelicals and all other heterosexuals can go on living just as they always have. They are not being hurt and don't need to be protected.
But the fundies know that. They're not interested in protection or equality. What they want is to force everyone else to live as they do. Personally, I don't care what they believe or how they live, but I do object to them trying to force their own beliefs and lifestyle on those who don't want it.
But maybe I'm wrong. I'm willing to change my mind, if someone can show me how they've actually been damaged by two strangers getting married.
Posted by Ted McLaughlin at 12:02 AM