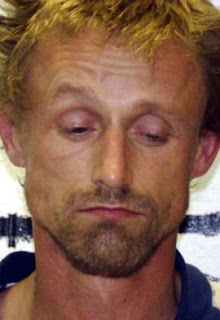 This is a rather scary story. On Monday, FBI agents arrested an Oklahoma man for offering to sell 25 gallons of sodium cyanide to an undercover officer he thought was a member of the Aryan Brotherhood. They then executed a search warrant and found the cyanide in the man's home.
The story started right here in Amarillo. An inmate at the Potter County Detention Center told authorities that Jeffrey Don Detrixhe (pictured above) had offered him a pound of methamphetamine (worth $8000) if he would deliver 100 pounds of cyanide to Oklahoma City.
That was in November. Since that time, authorities have kept Detrixhe under surveillance and taped his conversations with the informant. He told the informant that the cyanide could be transformed into a gas by adding hydrochloric acid, and bragged "I could kill a city with that...euthanize a whole town."
The informant convinced Detrixhe that he knew a member of the Aryan Brotherhood who would buy the cyanide. Detrixhe offered to sell 25 gallons of it to an undercover agent for $10,000, a thermal imager and an AK-47. That's when he was arrested.
He is expected to be brought back to Amarillo to be prosecuted. I hope he gets a very long sentence. We really don't need creeps like him running loose on our streets.
Posted by Ted McLaughlin at 12:04 AM